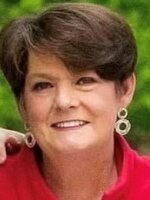 Julie House Jones, 54, passed away on Friday October 15, 2021 from complications associated with Pulmonary Hypertension.Julie was born on May 23, 1967, in Fort Worth, Texas to parents Judy and John House. Julie was a loving wife, daughter, sister, friend but most important to her she was an amazing mother. One might remember Christmas 2003, the highly publicized, tragic car accident in Fort Worth in which a drunk driver hit a couple returning home to their newborn twin babies, leaving the father dead at the scene. This was Julie’s story, but it didn’t end there. She found strength in her sadness and raised her two children, now 18 years of age. Julie also had great community outreach and was involved with Mothers Against Drunk Driving and the Texas Alcohol and Beverage Commission, speaking to high schools and prisons about the dangers of drinking while driving and decision making.Julie received the State Farm Life Insurance Embrace Life Award. This recognizes five women annually who have persevered and inspired those around them after the death of their spouse. Julie was an inspiration to many and admired by all.Julie Graduated from Texas Christian University in 1990. She came from a family of horned Frogs and was a true fan attending most home games. Julie’s son, Jacob is now carrying on the tradition and is a freshman at TCU. Julie’s daughter, Lauren is attending SMU and is embracing her first year of college. Julie was so proud of her children and devoted her life to them.Julie was predeceased by her father, John House, her Husband, Brent Jones, and Brother-In-Law, Brian Jones. She is survived by her Mother, Judy House of Fort Worth; twin children, Jacob and Lauren Jones of Fort Worth; Brother John (Jay) House of Fort Worth; Brother-in-law Brad Jones, Sister-in-law Karen Spathias and her husband Roger Spathias, Nieces Karris House, Kaelen House, Rebecca Jones, Elizabeth Jones, Haley Spathias of Fort Worth, Nephew Taylor Spathias of Houston, and Cousins Lisa Harmet, Dave Harmet, Sara Harmet, and Blake Harmet of Clarendon, IL.