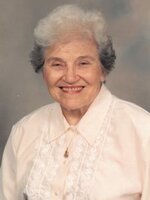 Josephine Cox passed away March 14, 2022.Josephine, known as Roy to her grandchildren and great grandchildren, was born December 10, 1925 in Pilot Point, Texas to John and Ursula Strittmatter. She was a graduate of Mount Carmel Academy and TCY. She married Lonnie Cox and they enjoyed 61 years together. Josephine retired from General Dynamics after 20 years of service. She was a member of Holy Family Catholic Church where she volunteered her time to several ministries She also volunteered as an usher at Bass Hall and at Alice Carlson elementary school. Josephine learned how to snow ski at the age of 60 and went as often as she could. She enjoyed square dancing, creating quilts for friends and family, traveling and playing bridge. She loved and spoiled her six grandchildren and she will forever have a special place in their hearts.She was preceded in death by her husband, Lonnie Roy; parents, John and Ursula Strittmatter; son, Donald; brothers, Albert, Raymond and William; sister, Bernice May; and daughter-in-law, Anita.Survivors: Sons, Raymond Ralph (Linda); grandchildren, J.J. (Tracie), Michele (Geoffrey), Jacob, (Tara), Candi (Justin), Tammy (Bill), and Joshua; eleven great grandchildren; and one great great grandchild.