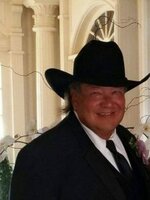 Johnny passed away peacefully in his home surrounded by his wife, children, and stepchildren at the age of 66, in Alvarado, TX. He was preceded in death by his mother Mary Georgian Reynolds. He was survived by his father John James Reynolds Sr.; wife Mollie Reynolds; daughter Christina Nicole Reynolds, son Kasey Lee Reynolds and their mother, Mary Beth Parks; brother Jack Reynolds; sister Kathy Reynolds Kanawite; his nephew John Johnson and wife Brandy Johnson, his nephew Scott Reynolds and his daughter Kaygan Reynolds, his niece Krista Lewis and her husband Garrison Lewis and their children Grayson and Mackynzie Lewis; his stepchildren Courtney and Billy Lacaze, Hannah and Christopher Welling, and Garrett Welling; and his six grandchildren Tracey and Lilly Lacaze and Riley, Aaron, Connie, and Nathan Welling. John lived a full and happy life doing what he wanted no matter what, until the day he made his journey home to heaven. He touched the souls of everyone he met and made an everlasting impression. He will be greatly missed.