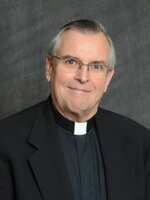 ARLINGTON — “He was open to helping anybody. Despite his own sufferings, he was always there to serve God and help those in need.”That’s how St. Joseph parishioner John Fincher and other North Texas Catholics will remember Father Thomas J. Kennedy, who died February 28 in an Arlington hospital. He was 68.A visitation and Rosary is set for Monday, March 7 at 6 p.m. in St. Joseph Church, 1927 SW Green Oaks Blvd. in Arlington. Bishop Michael Olson will celebrate a Mass of Christian Burial on Tuesday, March 8 at 11 a.m. at St. Joseph Church with interment following in Moore Memorial Gardens.Born to Margaret and Thomas J. Kennedy Jr. in Garland, a young Tom Kennedy grew up in Arlington where he attended St. Maria Goretti Catholic School and later Nolan Catholic High School. Before discerning a vocation to the priesthood later in life, the skilled mechanic traveled to Alaska, Africa, and other parts of the world to work on oil rigs. His wide berth of experiences made him an engaging conversationalist.“Fr. Tom would join us for coffee and donuts in the morning and regale us with all kinds of stories,” said John Sgro, a member of Tuesday Guys—a men’s group at St. Joseph that does weekly maintenance chores around the parish. “He was a worldly person who was well-versed in politics and current events, and he shared all that with us.”Parochial vicar at St. Joseph in Arlington since 2018, Fr. Kennedy was always approachable and available to parishioners.“He was very open with people,” Sgro observed. “Anybody could go to him anytime of the day and, no matter what he was doing, he would stop and give that person whatever time they needed. He was well-loved by everybody here.”After completing his studies at the Oblate School of Theology in San Antonio, the former oil and gas consultant was ordained to the priesthood by Bishop Kevin Vann on July 7, 2007, in St. Patrick Cathedral. His first assignment was as parochial vicar at St. Michael Parish in Bedford, followed by serving as parochial administrator and then pastor of Holy Angels Parish in rural Clifton and Our Lady of Guadalupe Parish in Morgan.The diocesan priest’s gentle, caring personality and willingness to offer comfort in troubled times was never more evident than after a massive industrial explosion ripped apart the nearby community of West, Texas, in April 2013. Just hours after the nighttime blast took 15 lives and injured 200 others in the predominantly Catholic town, Fr. Kennedy arrived at Hillsboro Medical Center to aid those affected by the tragedy.“At one and two o’clock in the morning there were nine or 10 different ministers from different churches there and we were all doing the same thing — just trying to console people,” Fr. Kennedy recalled in an NTC interview afterward. “It was an incredible thing.”The following day, he visited victims housed in a Red Cross shelter to deliver bottled water, blankets, and messages left on his cell phone from family members.After a shocking, life-altering event, “the best thing you can offer people is a calming presence,” he said.A compassionate listener, Fr. Kennedy also eased people through spiritual battles. When Kinley Murray, a parishioner at St. Thomas Aquinas Church in Pilot Point, struggled with faith issues, the cradle Catholic turned to her pastor for help.“Fr. Tom advised me to go through RCIA. I did and for that I am forever thankful,” she said, referring to the formation process used to instruct converts. “It was a way of learning more about my faith and answering my questions.”The Murray family and other St. Thomas Aquinas parishioners were sad when their pastor moved to Arlington but many, like Deacon David Garza, remained close friends with him.“He was a good homilist and knew his religion,” the retired deacon said, noting Fr. Kennedy was particularly adept at helping people understand liturgical practices. “If there were family members at a funeral who were not Catholic, he was really good at explaining why we did things. Afterwards, friends would tell me they were really impressed.”Dcn. Garza described Fr. Kennedy simply as, “a very good priest. If you needed help, he was there,” he added.A member of the Knights of Columbus from the age of 18, Fr. Kennedy was a dedicated 4th Degree Knight and served as chaplain to the organization wherever he was assigned. He was also the faithful friar for Mary, Queen of Peace Assembly #2112.“He was very insightful about our Faith in Action program and gave us advice,” explained Grand Knight John Kotlarich of St. Joseph Council #13470. Kotlarich said Fr. Kennedy was not only a fellow Knight but also a friend. “We’d talk before and after Mass because we had so many common interests.”The Knights will miss Fr. Kennedy’s company and encouragement, he said, adding, “A lot of people look at death as a loss. I see it as gaining an advocate in heaven for us.”After serving for years in rural parishes, returning to Arlington allowed Fr. Kennedy to spend more time with his late mother and reconnect with other family members, according to his sister, Anne Showers. She always considered her brother special but noticed a real transformation after his ordination to the priesthood.“He was so quiet, I wondered how he would ever give a homily,” the sibling reminisced. “But that’s the work of the Holy Spirit.”His desire to help others as a priest is something Fr. Kennedy shared with his family throughout his life.“He wanted to get well so he could go back to doing what he was meant to do — serve,” she added. “I try to be positive and see him serving in a different way now.”Fr. Kennedy is survived by sisters Anne Showers, Kate Nephew, and several nieces and nephews.