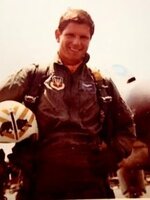 Charles Robert (Rob) Stenson Jr., 78, passed away peacefully at home on September 30th, 2021 surrounded by his loving family.He is survived by his wife, Beth; children, Hollie Stenson, Robin Stenson and Charles Stenson III; sister, Ricki Curran (John) and several extended family.Rob graduated with an undergraduate degree from San Jose State University. He then joined the United States Air Force and was sworn in by his uncle Bill Stenson, a WWII veteran. Rob was a fighter pilot during the Vietnam and the Cold War. He was a Weapon Systems Officer flying the F-4 Phantom jet.While in the service, he received a Masters Degree from the University of Arkansas. Rob was medically discharged but enjoyed an 11 year career with the Air Force. He was not only a fearless fighter pilot but maintained a positive attitude fighting a rare form of cancer for 45 years.After leaving the Air Force, Rob worked for First Command (formerly USPA & IRA), a financial planning company dealing with military families for 30 years.He had a personality that knew no stranger. He was a home-brewer, loved God, his country, and fiercely loved his family. He was known as “the silver-tongued devil” for his unmatched charm and will be greatly missed.