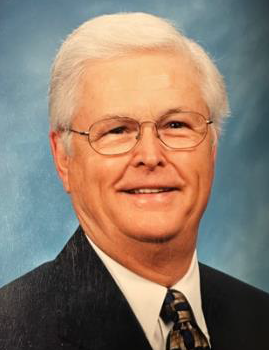 Donations may be made to: Alzheimer’s Association (alz.org).

James was born on May 6, 1931, in Altus, Oklahoma, the only child and son of Rufus and Pearl Holcomb, grandson to Nannie Whitwell and nephew to Effie Myers, who collectively influenced his childhood and life. He graduated from Altus High School and from the University of Oklahoma with a Bachelor of Science in Pharmaceutical Sciences. He married Barbara Brown on February 14th, 1956.

James and Barbara were married for 56 years and lovingly raised their children, Joe, James Jr., Emily and Alane. James spent several years as a pharmacist, then worked for Eli Lilly and Company as a Pharmaceutical Sales Representative for 35 years until his retirement in 1990. He proudly served in the United States Army on the 245th Tank Battalion.

He was a member of First Presbyterian Church, Arlington for 20 years, where he served on various committees and sang in the choir. He had a great love for music of all kinds, enjoyed entertaining friends, traveling, working in the yard, and playing golf. He was active in the local Barber Shop Quartet, and Yokefellows group. While residing in Tyler, Texas, Barbara succumbed to a long battle with Alzheimer’s disease and James became widowed.

On June 7th, 2014, James began a new chapter in his life when he married Mary Ann Lee, and he spent the next six (6) years enjoying a full and active life with Mary Ann. Sadly, last year, Mary Ann passed away.

On April 8th, 2022, James married Marion Joan Gallas and their life together was cut short by James’ death.

James was a personable, gregarious, loving and devoted husband, father, grandfather and friend who had a kindness and likeability that will be remembered through the generations!

Members of the Lee family include daughter Karen Smith (Doug), and son Charles T. Jr. Lee (Jamie) and their children and grandchildren.

Members of the Gallas family include daughter Debbie Horton (Scott), and son Mark Gallas (Heather) and their children.

While James will be deeply missed, we trust in God’s perfect timing and in the knowledge that he is in the presence of our sovereign God.

Interment will be at Moore Memorial Gardens.