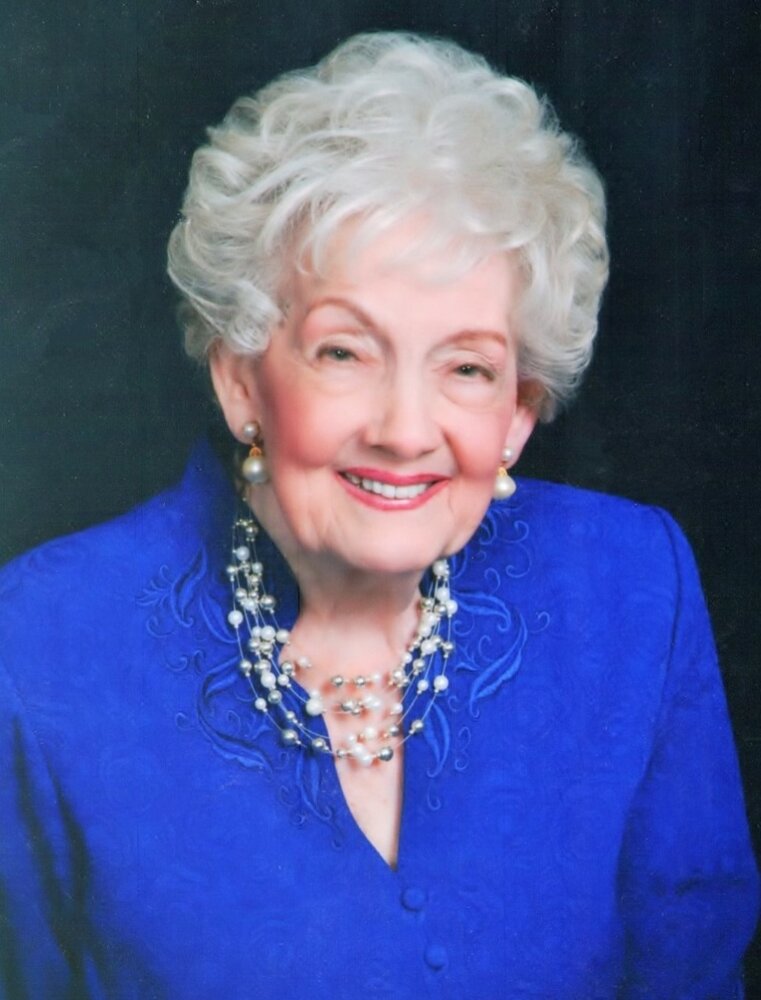 The funeral services will be at Broadway Baptist Church, her church home for 65 years, at 11:00 a.m. on Thursday, August 18, 2022, with a reception following the service.

Memorials: If you would like to make a donation to Dot's memory then please consider: Broadway Baptist Church or the Humane Society of North Texas or charity of your choice.

She was able to see the bright world around her and forgot nothing.  She was full of faith in Christ, even thanking Him for the small things like finding her wallet when it was misplaced or helping her find a parking spot close to the door of a store!  Her son once asked her if the weird weather patterns and current illnesses might indicate the end of the world as announced in Revelations. Dot reminisced that at a park in Beaumont, TX she attended a high school picnic with all of her friends.  There came a huge explosion that turned the sky black !  It was the Texas City Oil Refinery Explosion on April 16, 1947 --- it killed 600 people and made a 15 foot tidal wave.  She said they all ran home since it was the end of the world.  Then she points out, that as you now know it was not the end of the world. Then she polished off her story by saying that only God knows of His coming so best not to worry about such things!

Dot's slow decline allowed the family time to say goodbye and prepare her way to her new home.  She said that the shadows in the valley were cast because you were walking into a Light that would remove all of the pain.  She was confident of a better place without dentures, walkers, bedpans, diapers and hearing aids.

She  was the only daughter of Loucies W. Carnegie and Annie Gray McDaniel Carnegie, born July 3, 1929 in Port Arthur, Texas.  Her mother was struck by severe postpartum depression and institutionalized in Wichita Falls Psychiatric Hospital for the rest of her life. Dot visited her once every year; though she did not know who Dot was.

Dorothy was raised by close friends of her parent's, LE (Louis Edwin) and Georgie Nantz as foster parents.  Through the Nantz's kindness, Dot never felt without a family.  They insisted that she follow the Golden Rule (treat others as you would treat yourself).  She played with cats because she said they were nocturnal, like her. Dot dressed the cats in doll's clothing and pushed them around in a baby buggy.

Dot attended grade school in Port Arthur with the likes of Janis Joplin who she met once at a party.  She mentioned that her aunts would have her followed by a detective to make sure that she did not smoke nor wear make-up, the evils of the day.  She left Port Arthur to attend college at North Texas University in Denton to pursue a degree in English.  Dot met her future husband, Don Deardorff, in Denton in 1947 during golf class. She was not enthusiastic about dating Don but her friends stressed not to turn down the captain of the basketball team! The two pursued  careers in teaching and got engaged.

Don and Dot went to Pan American University in McAllen, TX and got married 3/21/1949. Dot taught English and Don taught art.  The only relative to attend the wedding was Dot's Aunt Rose Van Studdiford who took the milk train, with the cows, to "The Valley".  Dot and Don left  The Valley to teach in Fort Worth by 1952.

Dot taught English at McLean Middle School and Don taught art and math at Rosemont Middle School.  Dot especially like Mythology which gave her the penchant for saying: "No act of kindness, no matter how small, is ever wasted" from Aesop.  Don and Dot adored travel to Mexico because it was an "artist's paradise".  One time, in Acapulco, they stayed overnight in a hotel with only 6 finished stories.  It rained all night and, upon leaving, the next morning, Dot decided to use the elevator despite a warning it might be unsafe.  She was terrified as it rose and declined but never stopped, and she could smell burning wires.  Finally the doors opened, and she rushed out, glad to be free.  She saw only sky and two workmen sitting on steel girders eating their lunch because the elevator let her out at the unfinished 20th floor.  She had to walk down 20 flights of stairs in the ever present high heels.  Always the "fashionista" !  Don and Dot traveled to all but 2 of the National Parks.

The couple joined Broadway Baptist Church in 1957.  Dot loved her new church and served on different decorating committees. She also participated in Delta Kappa Gamma Society of the Women's Club of Ft. Worth.  Their first child, Dylan, arrived in 1959.  Dylan was followed by a second child, Daralynn in 1964.

Don and Dot outgrew their small home and together drew up their dream home for Hildring Drive West.  They went every day to the jobsite to see if their unusual plans were being followed.  The home was striking and featured in the local papers and architectural magazines for it's eclectic use of materials.  Dot encouraged her children to do the things that they thought were unattainable.  She liked shooting for the moon because, even if you missed, you would be among the stars!  She reminded her children not to let anyone's opinion of them become their reality.  During hard times she was always quick to repeat her mantra: "This too shall pass".

Dot retired after 30 years of teaching in 1982. During retirement, Dot devoted herself to: tutoring students, philanthropy with the Humane Society and American Indian groups and travel.

Don and Dot lived together in their home until Don's death in 2010, after 61 years of marriage.  Dot remained in her dream home accompanied by her cats, neighbors, and friends who made it possible.

She is survived by Dylan Deardorff and his partner Will Edmondson and Daralynn Deardorff married to Walter Hatter with two granddaughters, Joye Hatter and Hope Hatter.

P.S. The picture of white trumpet flowers in a red vase is a family treasure that Dot painted at age 10 and got the first prize at the Beaumont, Tx State Fair in 1939.