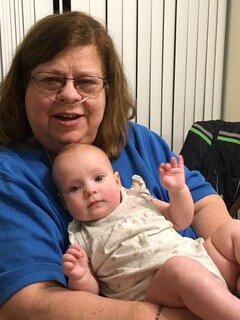 Sandy was born on November 16,1956 to Robert and Janet Mease in Goldsboro, N.C. As Sandy’s father was a U.S. Air Force pilot, she proudly proclaimed herself an “Air Force brat” as she relocated to various locations around the country including Hondo, TX, Charleston, S.C., Montgomery AL, McGuire AFB, NJ and eventually back to Montgomery AL.

In 1975 Sandy began attending Auburn University where she met her future husband, Bill. Sandy and Bill were married on June 11, 1977 in Montgomery, AL and soon moved to Fort Worth, TX where Bill was employed by the then General Dynamics (now Lockheed Martin Aeronautics).

Sandy received an Associates Degree in Applied Science, Marketing from Tarrant County Junior College in 1983. Upon receiving this degree Sandy worked for TCJC, South Campus in the Computer Sciences Department. She left her job in 1984 to become a full time mom to her first child who had under gone a medical procedure that required her full time attention for a period of several months.

Sandy was a loving wife and mother to her four sons, Brian, Matthew, Patrick and Ethan. She was constantly involved in all of their activities through PTAs, as a soccer coach, Cub Scout Den leader, Cub Scout Day Camp leader, Boy Scout leader and as a member of the Southwest High School Band boosters.

As her sons grew older and required less of her daily attention Sandy returned to work in a field that she truly loved and excelled at, teaching young children. Sandy was employed at St. Christopher’s Episcopal Church preschool as a teacher in the five year old class for a number of years.

Early in 2009 Sandy was diagnosed with breast cancer. After receiving chemotherapy and radiation treatments Sandy was declared cancer free in 2010. Unfortunately Sandy was afflicted with another ailment in 2011 when she was diagnosed with Pulmonary Arterial Hypertension (PAH). This condition required Sandy to be on supplemental oxygen 24 hours a day. This however did not stop her from supporting her sons at every opportunity and caring for three of her grandchildren. Up until April 2022 Sandy was still able to travel and visit family, especially a son and daughter-in-law and three additional grandchildren, including her beloved first granddaughter, living in Washington D.C. Shortly after her last visit Sandy’s medical conditions began to deteriorate to where she was mostly homebound. The PAH eventually took her away from us. She is now without pain and at peace with the Lord.

The family wishes to thank the doctors and nurses of the Trauma-Surgery ICU at Harris Hospital Fort Worth, Bloxom Tower, Level 2. They will forever be remembered in our hearts for their kindness and compassion during Sandy’s brief stay.

In lieu of flowers the family asks that an in kind donation in Sandy’s name be made to The Family Rock in Kennedale, TX (website: https://family-rock.org/home) or to the American Cancer Society ( https://www.cancer.org/ ).